In this episode, we are going to be talking about the relationship between thiamine and fatigue, especially chronic fatigue.

Thiamine, or vitamin B1, has an impressive amount of research building up behind it for helping with fatigue from a wide variety of causes.

Many of us are not unfamiliar with fatigue. Unfortunately most of us will experience fatigue – even chronic fatigue – at some point.

However, for some of us, this fatigue can become chronic and debilitating, and severely limit our ability to live a happy, productive, and energetic life!

So when there are options available that can help you overcome fatigue, I want to be able to share these options with you so that you can take control of your own health and live the life you deserve to be living!

Where Has Thiamine Worked for Fatigue in the Research?

Thiamine, or vitamin B1, has actually been shown to work well for a wide variety of health conditions that often have fatigue as a symptom of the condition, such as Multiple Sclerosis, Hypothyroidism, Fibromyalgia, and Inflammatory Bowel Disease!

Let’s just take a quick look at what happened when thiamine was given for fatigue in these conditions.

For example, in a pilot study where Multiple Sclerosis patients were given regular thiamine (600–1,500 mg/day orally or 100 mg/mL once a week intravenously) for 20 days, the researchers concluded,

“The administration of large quantities of thiamine was effective in reversing the fatigue in MS, suggesting that the abnormalities in thiamine-dependent processes could be overcome by diffusion-mediated transport at supranormal thiamine concentrations.”(1)

The average fatigue scores decreased from 45.4 to 26.9 units.

In another case series, researchers gave 3 patients with Hashimoto’s Disease (an autoimmune form of low thyroid hormones) high doses of regular thiamine (600 mg/day by mouth daily or 100 mg/ml intravenously every four days) for about 2 months.(2)

Here are the results of the fatigue scores:

This is very important for those with hypothyroidism, because many patients continue to suffer with symptoms like fatigue even after they go on medication and their lab values are “normal”. At this point, usually their medical doctors has no further options for them, and the patients are left to suffer with sometimes debilitating fatigue. Thiamine should definitely be tried in situations like these in my opinion.

Fibromyalgia is associated with chronic widespread pain, but much of the time another symptom that tags along is chronic fatigue.

There are many reasons why someone might develop fibromyalgia, including emotional and stress contributions (like most chronic diseases), but getting into all the various contributions of fibromyalgia is beyond the scope of this article.

In 2013, the same group of researchers wanted to see what the effect of high dose thiamine would be on 3 fibromyalgia patients. One of the symptoms these patients had was chronic fatigue. (3)

After about one month on 600-1,800 mg of regular thiamine per day, the patients’ fatigue scores improved significantly:

Importantly, there were individual differences in response to supplementation, and sometimes the dose needed to be increased quite a bit to get results:

“The lowest dose that we used is 600 mg/day (patient 1), and then a dose of 300 mg was increased every 3 days depending on the weight and the results obtained. Patient numbers 2 and 3 never reported any improvement until the dose was increased up to 1500 mg/day, orally. An abrupt improvement instead occurred at doses of 1800 mg/day.”

Besides intestinal pain, bloating, etc., IBS patients are known to often suffer from chronic fatigue, and most of the time their doctors don’t have many options for this particular symptom of the condition.

It is well known that IBS patients suffer from many nutrient deficiencies, one of which can be thiamine. (Keep in mind, though, that thiamine is NOT the only cause of fatigue in IBS, nor in most chronic disease conditions.)

After the supplementation, the researchers found:

One thing to keep in mind is that these studies are in the preliminary stage, and thus cannot be said to be “conclusive” at this point.

However, we also have other evidence from many other labs that show that low thiamine status is significantly associated with depression, which tends to come along with fatigue.(5, 6, 7)

Why Do We Need More Thiamine?

Many people (and medical doctors) think that vitamin deficiencies are pretty rare nowadays.

I mean, aren’t all of our foods “fortified” with vitamins, including thiamine? How can we still be deficient?

Thiamine, or vitamin B1 (the first b-vitamin ever discovered), is a very important vitamin for many different parts of our body, but especially the nervous system.

While full-blown B1 deficiency (called Beri Beri) is definitely more rare now than in the past, it appears that many people are walking around (and suffering with) “subclinical” thiamine deficiency.

This is where you may have some symptoms of B1 deficiency, like fatigue, but not the full blown Beri Beri syndrome.

But why are so many people getting low on thiamine??

Ever since we’ve been able to process and refine food for the past 100 years or so, more and more people are relying on these sorts of foods for a good percentage of their calorie intake.

Natural, unrefined carbohydrates always have natural thiamine in them.

Now, many of the vitamins that get removed from the processing and refining (including thiamine) get “fortified” back in (a form of supplementation) afterwards. If you look on most processed foods, you’ll see a bunch of vitamins in the ingredients that were added back in.

This is all fine and dandy for most of these vitamins, but thiamine as a supplement has a VERY hard time being absorbed compared to how well it is absorbed when it is encapsulated in the food cellular matrix originally before processing.

This “poor bioavailability” is why the dosage for the studies above needed to be so high: the very high dose is needed to overcome the low absorption that occurs from supplemental thiamine.

Over time, this causes us to be low in thiamine, or have a “subclinical thiamine deficiency”.

Unfortunately, the vast majority of lab testing available at doctor’s offices do not have the ability to properly test for low thiamine. So no, this unfortunately will not show up on your blood test.

Therefore, by far the largest reason that people are low in thiamine is because of their reliance on processed foods instead of all unrefined foods.

Keep in mind, you can still use regular thiamine HCl as a supplement, but you will just have to mimic the types of dosages used in the studies above (600 – 1,800 mg per day) in order to get sufficient results.

This is also why just taking a regular “b-complex” will almost always not be enough to restore a thiamine deficiency. A b-complex can restore the deficiencies of most of the other b-vitamins, though.

(I prefer the “HCl” version over the “mononitrate” version because the acidity from the HCl helps the molecule absorb a little bit better.)

Please remember that none of the information on this entire website is medical advice. I am not a medical doctor, and I do not know your personal medical history. Always talk with your health care provider before changing any supplements, medications, or diets.

Now that type of dosage might sound like a lot, but the good news is that high dose thiamine is extremely safe. In fact, no significant side effects were found in any of the studies above that used these vary high dosages. It has also been used as a supplement for literally 100 years.

The most that can usually happen is a little bit of stomach pain if you take it on an empty stomach and sometimes a sulfur or “metal-like” smell coming from the body or armpits. This smell is related to the dose (higher dose makes a worse smell), and it doesn’t happen to everyone.

The smell might be coming from “chelating” lead or other heavy metals, but there is still some debate here.

Sometimes the smell eventually goes away. Thus, if you happen to notice the smell, just start with a low dose (~100-200 mg) for a month or so. Usually the smell will go away at this dose. Then after a month, you can start playing around with increasing the dose and see if the smell comes back.

Keep in mind, this is just from personal experience. It doesn’t happen to everyone, and none of the studies above mentioned it.

Another (better?) Option for Thiamine

Another option for thiamine supplementation is Lipothiamine or Allithiamine.

Both of these are actually the exact same compound, just produced by different companies.

This form of thiamine is very well absorbed compared to regular thiamine HCl. It usually works a lot better for reducing thiamine symptoms.

While this form of thiamine doesn’t usually give you the “metal” smell, it can make your breath have a sort of “garlic breath” smell for a few hours after you take it.

If this happens to you, a simple solution is just to take the thiamine at dinner or closer to bed time. Usually the smell is gone by the next day.

One Last Thing to Know

Thiamine works extremely well with magnesium. Actually, some key enzymes that your body needs to produce cellular energy rely on both magnesium and thiamine.

Because of this, thiamine supplementation doesn’t work as well when someone is also low in magnesium. Also, sometimes supplementing with only thiamine can “amplify” magnesium deficiency symptoms.

Please feel free to post any questions or comments below!

Also, please consider sharing this to one person who might really benefit from this info! They will appreciate it! 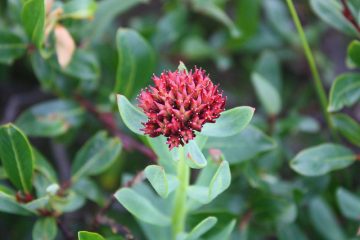 Chronic fatigue seems to be more prevalent today than ever before. In fact, now there is an official diagnosis for “Chronic Fatigue Syndrome”. While many doctors in the past dismissed chronic fatigue as “psychosomatic” or Read more…