Rhodiola is considered an “adaptogen”. This means that they help increase the resistance of the person to stressors and allow the person to better positively adapt to the stress.(1) There are many different types of adaptogens. Some are more calming and some are more energizing. While many people say that adaptogens always balance the system more towards normalcy, this isn’t always true. While most adaptogenic herbs will tend to raise low cortisol and lower high cortisol, Ashwagandha almost invariably will raise thyroid hormone (which I’ve talked about here), and thus will not make thyroid hormone go towards normalcy. For the most part though, adaptogens to tend to allow the person to better adapt to whatever stress they are under.

While Rhodiola can be calming for some people, the majority of people find it energizing. However, at the same time, Rhodiola downregulates a particular serotonin receptor that is at least partially responsible for anxiety (5-HT3 receptor)(2,4), thus many people find that although Rhodiola energizes them, it can make them less anxious too!(3) However, for people who find even slight stimulation anxiety-provoking (such as drinking a large coffee), Rhodiola may not help their anxiety.

Overview of some research on Rhodiola

Due to its usual stimulating effects, many studies have tested it for its ability to alleviate fatigue. One early study in 2000 tested the ability of Rhodiola to reduce fatigue and assesed “cognitive cerebral functions, such as associative thinking, short-term memory, calculation and ability of concentration, and speed of audio-visual perception” in healthy physicians undergoing night-shift duty. This was a double-bind, placebo-controlled, cross-over study, in which each physician received both Rhodiola extract and placebo for two weeks at different time periods. Only while taking the Rhodiola did the physicians score higher on a battery of cognitive tests while on night-shift duty. The authors concluded that “These results suggest that RRE can reduce general fatigue under certain stressful conditions.”(5)

Another study tested the effect of a standardized extract of Rhodiola on stress-related fatigue in 2009. While the placebo group saw some improvements (i.e. the placebo effect), the Rhodiola group saw improvements that were much larger in relationship to fatigue. The authors concluded, “… repeated administration of R. ROSEA extract SHR-5 exerts an anti-fatigue effect that increases mental performance, particularly the ability to concentrate, and decreases cortisol response to awakening stress in burnout patients with fatigue syndrome.”(6)

The last study that I’ll discuss was done in 2017. The title is “Rhodiola rosea in Subjects with Prolonged or Chronic Fatigue Symptoms: Results of an Open-Label Clinical Trial.” This study is the weakest discussed so far because there was no placebo group, so take that into consideration. Participants had a large reduction in fatigue after 1 week and it continued to decline further until the end of the trial at 8 weeks. A graph of the improvements is shown below:(7) 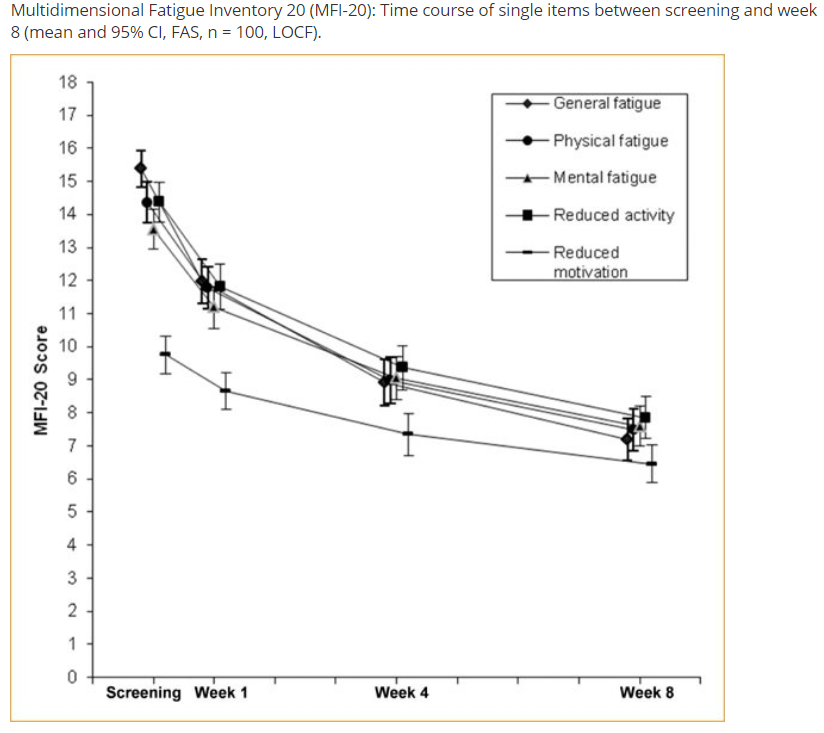 The molecular mechanisms of how Rhodiola works are not entirely understood, although we do have some clues. Rhodiola seems to increase ATP production, the energy for each cell, especially under stressful times or during exercise when ATP levels can fall.(8) Furthermore, Rhodiola seems to “balance” the hypothalamic-pituitary-adrenal axis after stress and also reduces the elevated cortisol from stress.(9)

How to use Rhodiola

Rhodiola is typically one of the herbs that most people can “feel”, at least after a week or so. As noted above, the effects typically build, without induction of tolerance. However, while there does not seem to be an objective loss of effect over time (as noted on cognitive tests), there can be a subjective loss of effect, as the person becomes more familiar with their “new normal”. For this reason, some people like to cycle the herb (such as 2 months on, 2-3 weeks off). However, this is not necessary and the vast majority of the studies did not cycle it. Everyone can respond differently though, so you’ll need to find out what works for you. In either case, always start out with a low dose, as taking too much at first has a possibility of being over-stimulating. Then, each week titrate the dose up until you find your personal sweet spot. For a typical extract (3% rovasins 1% salidroside), 300mg-800mg is a typical dose per day. One study showed that taking your full dose in the morning worked better than splitting up the dosage at breakfast and lunch, but again, see what works for you.(10) Taking Rhodiola too late in the day can cause insomnia for some people. Most people prefer to take it on an empty stomach.

The quality of Rhodiola can vary a lot between brands, so make sure that the brand you are getting it from can be trusted.

What if you have Chronic Fatigue Syndrome?

Keep in mind that if you are suffering from full-blown Chronic Fatigue Syndrome, it is unlikely that simply taking Rhodiola will lead to a complete remission of symptoms. While some people have experienced this, the majority have not. While it can be a tool that can help you, many people with Chronic Fatigue Syndrome are dealing with an unresolved viral, bacterial, or fungal infection or have an immune system that is still thinking that it is fighting a virus that isn’t there. Thus, having a complete work-up by a trained Functional Medicine physician is your best chance for a full recovery. (11, 12, 13)