The Research Behind Oil Pulling

Most people don’t think about swishing oil around in their mouth when trying to improve their oral health, yet this practice of what is called “oil pulling” is not only an ancient Ayurvedic Medicine practice, it also has solid research to support its effectiveness in oral hygiene.

Ayurvedic Medicine is a holistic system of medicine which evolved in India some 3000-5000 years ago and is still practised throughout the world today. While the theoretical underpinnings of Ayurvedic Medicine do not agree with western science per se, every year a monumental amount of research gets published confirming that this system of medicine does have validity, even if the explanations of how it works that scientists provide today are very different from how was traditionally described. Curcumin/turmeric, ginger, and cayenne pepper are all in the Ayurvedic system of medicine, for example, and today have a lot of research to back up their effectiveness for a variety of maladies.

“Oil pulling is a procedure that involves swishing oil in the mouth for oral and systemic health benefits, [usually for around 20 minutes or so]. It is mentioned in the Ayurvedic text Charaka Samhita and is claimed to cure about 30 systemic diseases ranging from headache and migraine to diabetes and asthma. Oil pulling has been used extensively as a traditional Indian folk remedy for many years to prevent decay, oral malodor, bleeding gums, dryness of throat, cracked lips and for strengthening teeth, gums and the jaw.” (1)

While we currently do not have modern research to suggest that oil pulling is effective for a variety of systemic diseases, we do have plenty of research that supports its use for oral hygiene and cavity prevention.

The traditional oil used for oil pulling was sesame seed oil. A study was first performed in 2008 using sesame seed oil that showed that, after oil pulling, “there was a remarkable reduction in the total count of bacteria” and that oil pulling “reduced the susceptibility of a host to dental caries“. The same group also performed an in vitro study (in a Petri dish) and found that sesame seed oil had a moderate effect on the viability of Streptococcus mutans and Lactobacillus acidophilus bacteria. (2)
However, this study did not have a placebo group to compare the results with and isn’t the most well-controlled study.

The specific effect of coconut oil on inhibiting dental cavities was shown in an in vitro (Petri dish) study, with an efficacy comparable to chlorhexidine (a topical antiseptic) and ketoconazole (an antifungal). (7)

While in vitro studies are nice to have, they don’t really show what would happen in a human body with prolonged use. Only human trials would be able to demonstrate a very significant effect that is directly applicable. Good thing two have been done so far:

In one study, researchers evaluated the effect of coconut oil pulling/oil swishing on plaque formation and plaque-induced gingivitis with 60 adolescent boys and girls who already had plaque-induced gingivitis. After 30 days, “a statistically significant decrease in the plaque and gingival indices was noticed from day 7 and the scores continued to decrease during the period of study.” (8) You can see the decrease in plaque from the image below: 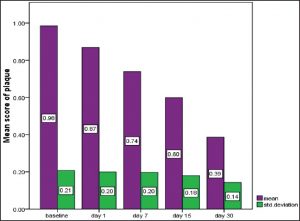 However, there was no other group to compare the results with. How well would coconut compare with a more intensive therapy, like a powerful antiseptic?

In 2016 there was the first randomized controlled trial that compared coconut oil pulling to chlorhexidine, a topical/oral antiseptic. They tested to see how well each therapy worked to reduce Strep. mutans count in the saliva. Strep mutans is a bacteria that has long been known to contribute to tooth decay (9) and in severe cases, or when a tooth abscess is present, can cause endocarditis (10), a very serious heart condition.

The study found that,

“Statistically significant reduction in S. mutans count was seen in both the coconut oil pulling and Chlorhexidine group.

CONCLUSION:
Oil pulling can be explored as a safe and effective alternative to Chlorhexidine.”

Similarly, a recent study comparing sesame seed oil with chlorhexidine showed that they both were about equally effective at reducing the plaque index, gingival index, objective and subjective organoleptic scores and anaerobic bacterial colony count. There were no significant differences between the two treatments. (11)

So as we can see, there is a lot of support for the use of oil pulling, whether it’s with coconut oil or sesame seed oil, in reducing oral bacteria count and gingivitis. The benefit of choosing an oil over an antiseptic is that there have never been any side effects reported with the oil.

So maybe it’s time for you to swap out that mouthwash for some (unrefined) coconut oil?

Leave a comment below with any experiences, comments, or questions!